RPM² is a brand new technology (MedHab, LLC) specifically engineered to enhance athletic performance. It is a foot bed technology that provides data to the user (gait, range of motion, force and power). RPM² facilitates the evaluation of the user in terms of these parameters as a result of four force sensors and a 9-axis sensor (gyroscope) embedded in a microcontroller, the latter of which allows for range of motion measurements of the lower extremities. A series of calibrations performed by the user yields force counts which are then converted into pounds of force. For running power, the calculated force, step distance and cadence are used to generate power values (Watts). Through this technology, athletes and/or coaches/trainers can formulate an initial evaluation of current level of performance and continue to monitor efficacy of training program efforts, all of which may be geared towards bilateral equivalence and/or improvement in athletic performance.

For the runner in particular, information regarding step rate, aerial time (flight time), stance time(ground time), and/or swing time can be particularly useful in the evaluation of running biomechanics and as such lends itself to objective measurements as an individual athlete undergoes performance enhancement strategies. The ability to look at overall force applied to both the left and the right leg are similarly important in evaluating the overall mechanics of running. While not within the scope of the current study, it is important to note that RPM² possesses the ability to further delineate the location of force application within the foot bed (hind foot, mid foot and fore foot) and determinations of power can be made. Power generated by the runners in this study could not be compared since the calibrated treadmill does not have this capacity.

The objective of this study was to determine the level of congruence between data obtained using a calibrated treadmill and that of the RPM² device. The parameters that were investigated included average stance time (milliseconds, ms), average aerial time (ms), step rate(Hz), swing time (ms), and left vs right overall force (N for treadmill; counts for RPM²).Two runners, considered professional runners, were asked to perform three to four 30 second sprints on a calibrated treadmill while wearing the RPM² insoles.

Finally, for the second runner, further evaluation was performed relative the overall force applied to the left and the right leg. Using the treadmill system, the overall average percentage of force applied to the left and right leg were 50.3%/49.7%, respectively, and 51.6%/48.4% as determined by RPM². Based on these data, it is clear that running data obtained by both testing modalities and using the parameters described herein, bears remarkable similarity one to the other. In another study comparing RPM² with the Pedar gait system (not reported herein), similar results were obtained.

This study demonstrates the usefulness and accuracy of RPM², as compared to a calibrated treadmill system, when evaluating running parameters such as flight time, ground time, step rate and overall distribution of force and consequently represents a viable option for the runner who wishes to evaluate their running mechanics outside of the training facility. 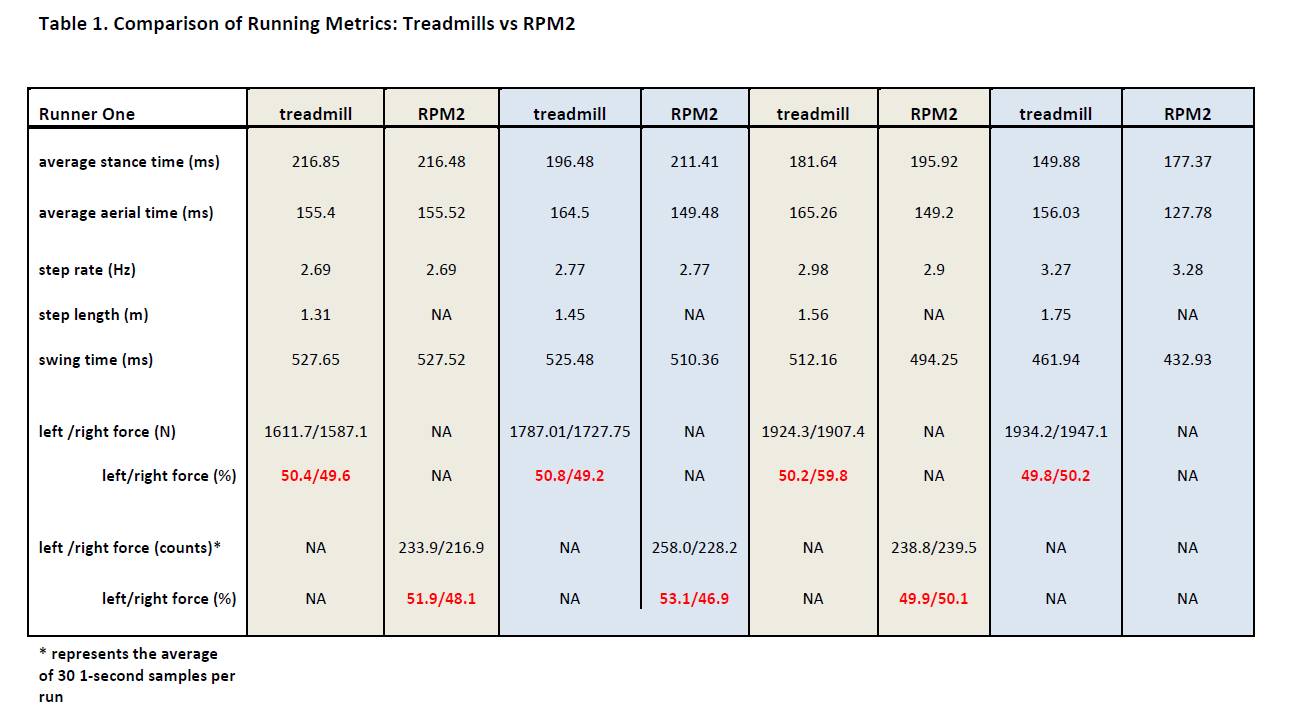